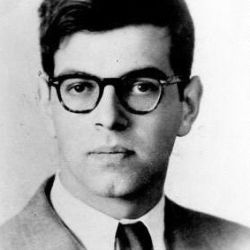 In 1948 I had married Wilma Abeles, who had fled to Canada with her parents from the German-speaking area of Czechoslovakia, which had been occupied by the Nazis in the fall of 1938. We met at the University of Chicago where she received her Ph.D. in Germanic Languages and Literatures. In the fall of 1950 we went to Little Rock, Arkansas, where we taught at Philander Smith College, a historically black school, and were both actively involved in the civil rights movement. Our three sons were born while we lived in Little Rock.

From there, in 1957 we went to New Orleans where we taught at Dillard University, also a historically black school, and where we too were both actively involved in the civil rights movement. The academic year 1960-61 we spent in France and Germany with the support of my Guggenheim Fellowship, and the following academic year in Germany with a Rockefeller Foundation grant. We returned to Dillard for a year and then spent two years in Chicago, where I taught at Roosevelt University and Wilma, at Loyola University.

In 1965 we went to Buffalo where I was a professor of European intellectual history at the State University of New York at Buffalo; Wilma was a professor of modern languages at Canisius College. In 1977 I was promoted to Distinguished Professor and retired in 1997, though until 2007 I regularly taught a graduate seminar each fall. Even before I took up the appointment at Buffalo, beginning in 1961, I frequently spent time in West Germany, and from 1966 on I also lectured in East Germany. I arranged graduate student exchanges between Buffalo and the Technical University of Darmstadt, West Germany, and the Academy of Sciences in East Berlin. Beginning in 1984, I also established scholarly contacts with China, Japan, and South Korea. I spent the fall of 1985 in Leipzig.

My research focused increasingly on historiography and the theory of history. My publications include The German Conception of History (1968), which I had begun during my Guggenheim Fellowship year; New Directions in European Historiography (1975); Historiography in the Twentieth Century (1997); and, with Qingjia Edward Wang and Supriya Mukherjee, A Global History of Modern Historiography (2008); as well as several edited works and, with my wife, an autobiography. My books have been translated into fourteen European and East Asian languages. I was a founder in 1980 of the International Commission for the History and Theory of Historiography and from 1995 to 2000 its president.

In 2007, German president Horst Köhler awarded me the Bundesverdienstkreuz erster Klasse, acknowledging in his press release both my work in civil rights in the United States and my establishing contacts between East and West German scholars during the Cold War.