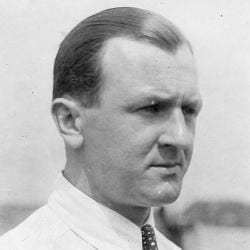 German artist George Grosz is best known for his paintings and caricatures, particularly his nihilistic portrayals of life in Weimar Berlin and his scathing criticisms of the Nazi regime. He was born in Berlin in 1893 and studied at the Academy of Fine Arts in Dresden. He served as a soldier in WWI for various periods between 1914 and 1917, until being declared unfit for combat. As a result of his experiences as an officer, Mr. Grosz developed a rabid political consciousness, going so far as to satirically assume the title “Field Marshal Grosz” when he briefly joined the Berlin Dada movement in 1918 with John Heartfield and Otto Dix. During the next decade, as a founding member of the realist movement Die Neue Sachlichkeit (The New Objectivity), he continued his savage depictions of wounded soldiers, prostitutes, corrupt businessmen, and other scenes of Berlin’s street life using ink drawings, oils, and photomontage.

Mr. Grosz left Berlin permanently in 1933, sensing increased hostility from the Nazi party towards his savage critiques of its regime. He accepted an invitation to teach at the Art Students League in New York, and became an American citizen in 1938. His Guggenheim Fellowship afforded him the opportunity to study portrayals of war in Italy by the Renaissance masters, and to further observe American life. Mr. Grosz’s work in America alternated between buoyant watercolors of Cape Cod and other American landscapes, and works focused on the destruction of war, as fascism steadily gained hold in Europe and WWII unfolded.

In 1959, George Grosz returned to Berlin with the intent of dividing his time between Germany and the United States. He died there of complications from alcohol just four weeks after arrival. He is considered one of the most preeminent modernist German painters, and his work is in, among others, the collections of the Museum of Modern Art, the Metropolitan Museum of Art, and the Neue Galerie Museum for German and Austrian Art in New York, the Kunsthalle Mannheim in Germany, and the Tate Modern in London.