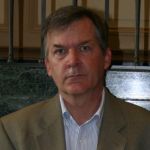 Education: South Carolina Governor's School for the Arts and Humanities

After publishing stories in literary journals, magazines, and anthologies for fourteen years, George Singleton’s first collection, These People Are Us, garnered critical acclaim in 2001. National Public Radio noted that “Singleton is a raconteur of trends, counter-trends, obsessions and odd characters,” on Morning Edition. In 2002, Mr. Singleton published The Half-Mammals of Dixie. Named a Book magazine Top Five story collection of the year, and an amazon.com Top Ten Book of the Year, The Half-Mammals of Dixie drew comparisons to the work of Flannery O’Connor and Harry Crews. According to the Atlanta Journal-Constitution, “Singleton’s South doesn’t look like anybody else’s.” In 2004, the New York Times Book Review noted of his collection Why Dogs Chase Cars, “Singleton’s hilarious insights come early and often;” then for Novel, published in 2005, “Singleton’s drollness and slow-release jokes sustain the narrative even during its wackier moments.” Kirkus Reviews noted of Novel, “Singleton may have invented a new genre. Call it The Hoot.” In 2006, the publication of another collection of stories, Drowning in Gruel, prompted the Atlanta Journal-Constitution to claim Singleton as “[the] unchallenged king of the comic Southern short story.” “Singleton is an ace at locating the pathos beneath the deadpan laughs,”according to USA Today. Of his 2007 novel Work Shirts for Madmen, Newsweek offered, “If there is a fiction genre blending the riotous, bleary-eyed excess and absurdity of gonzo journalism with the rather earnest, sensitivity of a John Irving hero—who always does right by his wife in the end—Workshirts belongs to it.”