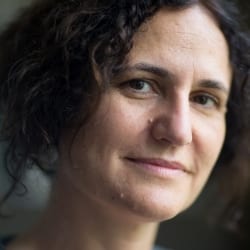 Gigliola Staffilani is the Abby Rockefeller Mauzé Professor of Mathematics at the Massachusetts Institute of Technology. She received the B.S. equivalent from the University of Bologna in 1989, and the S.M. (1991) and Ph.D. (1995) degrees from the University of Chicago. Following a Szegö Assistant Professorship at Stanford, she held faculty appointments at Stanford, Princeton, and Brown, before joining the MIT mathematics faculty in 2002. While at Stanford, she received the Harold M. Bacon Memorial Teaching Award in 1997, and was given the Frederick E. Terman Award for young faculty in 1998. She was a Sloan fellow from 2000-02. Staffilani has received grants from the National Science Foundation, as well as fellowships from the Radcliffe Institute for Advanced Study and the Simons Foundation. She was elected a member of the Massachusetts Academy of Science and as a fellow of the American Mathematical Society in 2013. In 2014, she was named as a fellow of the American Academy of Arts and Sciences.

Professor Staffilani’s research focuses on the discovery and invention of abstract mathematical tools that can solve a range of problems in the study of wave phenomena. Specifically, her work has been to study the longtime behavior of certain wave systems, to control the error of certain numerical approximations, and to determine probabilistically, that a particular outcome is the only observable expression of a certain wave. In recent years, it has become clear that in order to conduct a successful mathematical analysis for complex problems involving waves, one has to utilize tools from several areas of mathematics. With this in mind, Staffilani has spent the last fifteen years at MIT researching with a strong interdisciplinary approach. As a graduate student she was trained in the use of classical harmonic and Fourier analysis techniques to describe solutions of certain partial differential equations. While sharpening these tools over the years, she now complements this large analytic toolbox with ideas from classical probability, geometry, number theory and dynamical systems.

During her time at MIT, Staffilani has demonstrated a commitment to mathematical educational at all levels. She has trained several graduate students and postdocs, written formal lecture notes, given colloquia, taught summer schools on several continents, and introduced Calculus to hundreds of MIT freshmen. Staffilani has organized multiple conferences and special programs. She has advised several mathematical institutes on their future directions in mathematical research. Professor Staffilani is a strong supporter of diversity in STEM, and she currently serves as the chair of the Diversity Advisory Committee in the department of mathematics at MIT.

Staffilani is planning to use the Guggenheim Fellowship during her sabbatical year to write a monograph on her recent research.