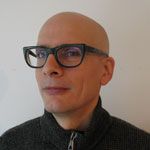 Since 2001 Hajoe Moderegger and Franziska Lamprecht have been collaborating under the name eteam. Most of their projects are based on random pieces of land they buy on eBay or in Second Life.

Land is an emitter and sucker of information. It absorbs whatever happens to its surface and stores this information in various forms. As a commodity it is traded like anything else on eBay and other markets. In 2002 eteam bought their first piece of land on eBay, located in Southern Utah. Since then they have been exploring options of land uses through continued acquisitions of different sized parcels and locations.

Each new location demands a different solution for what they see as an alternative potential of the place. An acre of desert in Utah with the Union Pacific Train tracks going near by—a train stop leads to a possible infrastructural improvement of the area (1.1 Acre Flat Screen). 10 Acres of land in the desert of Nevada with a dirt road crossing the lot—an artificial traffic jam uses the purpose of the road to eliminate its function as an attempt to get rid of this road (The Paradox of the 10 Acres Square).

Two abandoned landing strips near the town of Montello with a population of sixty-five. The creation of International Airport Montello solidifies an aerial promise that has been hovering above the land for quite some time (International Airport Montello). 3356 sqm in the 3D world of Second Life. The place becomes a public dumpster to provide a space where virtual trash can decay (SL Dumpster). One Acre of an allotment garden in Germany, divided into fifteen parcels, seven are rented out to people from the village. The renters are old farmers. They talk a lot about dying. In June 2009 they use the garden as a ship and go on a transatlantic landcruise, travel from Europe to America in six days, move forward without advancing (Landcruise).

There is the thrill of the still, the aesthetics of delay and the melancholia of the circle. Eteam proposes ways to interact with a piece of land as if it were a piece of canvas, where one can project a movie. They rely on human willingness to play and watch this movie at the same time. Their neighbors realize this dream.

The only audience is the video camera. And, maybe the artists, who believe that when a group of people temporarily believe in the same idea, the piece of land on which this is happening moves closer towards another true potential.

Eteam’s projects have been exhibited nationally and internationally, including the Centre Pompidou in Paris, P.S.1 and Eyebeam in New York, MUMOK in Vienna, Neues Museum Weimar, Nelson Atkins Museum of Art in Kansas City, and the Museo Nacional Centro de Arte Reina Sofia in Spain.

Eteam’s videos have been screened at the Transmediale in Berlin, The Taiwan International Documentary Festival in Taipei, the New York Video Festival and the 11th Biennale of Moving Images in Geneva.

They have received grants and awards from Art in General, NYSCA, Rhizome, the Experimental Television Center, and the Henry Moore Foundation, and they won the 2009 Bremer Video Art Award. They have been awarded residencies at the MacDowell Colony, Yaddo, Smack Mellon, Eyebeam, Harvestworks, and the Center for Land Use Interpretation. In 2009 they were awarded a Creative Capital Grant.

Hajoe Moderegger is an Associate Professor for time-based media in the Art Department at the City College of New York. During his Guggenheim Fellowship term, he will be taking a sabbatical from CCNY to work on OS Grabeland.