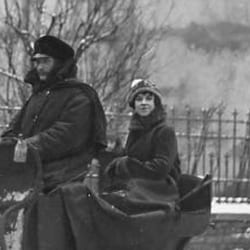 Flanagan, Hallie Ferguson (Mrs.): Appointed to make a study of tendencies in drama and theatre arts, with reference on the one hand to traditional European methods of production of the plays of classic artist, and on the other to new developments along the lines of play writing, scenic design, lighting, acting, and direction, as seen in the great theatres, both professional and experimental, of Europe; tenure, twelve months from July 20, 1926.