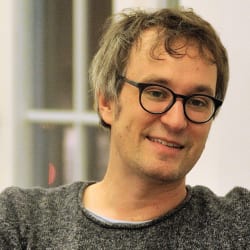 Hans Thomalla, is a Chicago based composer. His compositions explore the transitions between music as historically formed expression and music as sound as its own acoustic reality. He has written chamber music as well as orchestral works, and a particular focus of his activity lies in composing for the stage: his first opera “Fremd” for soloists, choir, large orchestra and electronics, was premiered at the main stage of the Stuttgart Opera in 2011. His second opera "Kaspar Hauser" was produced by the Freiburg Opera in 2016.

He has worked closely with groups such as Ensemble Recherche, the Arditti Quartet, Spektral Quartet ,Ensemble Modern, Ensemble Dal Niente, Ensemble Ascolta, Trio Accanto, and soloists such as Nicolas Hodges, Lucas Fels, and Marcus Weiss. A portrait CD of his works performed by Ensemble Recherche and Lucas Fels is published by WERGO, and a recording of his opera "Fremd" has been produced by Col Legno.

Hans Thomalla is Associate Professor of Music Composition at Northwestern University, where he is the founding director of the Institute for New Music. Born in Bonn, Germany, he studied at the Frankfurt Musikhochschule and received his doctoral degree in composition at Stanford University. From 1999-2002 he was an Assistant Dramaturge and later Dramaturge and Musical Advisor to the Dramaturgie at the Stuttgart Opera. He has been awarded numerous awards and fellowships, among others the Composer Prize of the Ernst von Siemens Musikstiftung, the Kranichsteiner Musikpreis, and the Christoph-Delz-Prize. In 2014/15 he was a fellow at the Wissenschaftskolleg zu Berlin. As a Guggenheim Fellow, Hans Thomalla will work on his third opera, “Dark Spring”.

A short excerpt from "Kaspar Hauser"

An excerpt from "Fremd"