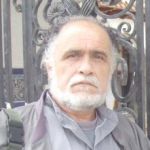 Venezuelan poet Harry Almela is the author of Instrucciones para amar el meccano (Caracas: Fundación para la Cultura Urbana, 2006) and eight other volumes of poetry and his work has been included in numerous anthologies. His many honors include the Círculo de Escritores de Venezuela’s Vicente Gerbasi poetry prize (2006); the Miguel Ramón Utrera biennial literary prize (poetry), awarded by the Cultural Secretary of the state of Aragua (2004); and an award in the 46th Concurso de Cuentos event sponsored by the journal El Nacional (1991).

Mr. Almela is a writer for the “Papel Literario” section of El Nacional and has been on the editorial board of Caracas-based journal Conciencia Activa. He has also conducted many workshops poetry and literature workshops at such venues as Centro de Estudios Lationamericanos “Rómulo Gallegos” (1981-82, 1992), where he was also a researcher for two years (1993-95) and at the Casa de la Cultura de Maracay (1983-87). In 1996 he was a guest lecturer in Spanish Language and Literature at the Instituto de Cooperación Iberoamericana in Madrid.

During his Guggenheim Fellowship term, he will be working on his tenth poetry volume, entitled Por la feraz campiña.