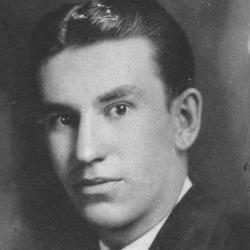 CLARK, HARRY HAYDEN:  Appointed to make a study of science and religion in the work of Benjamin Franklin and Thomas Paine, as part of a larger project involving the reinterpretation of American literature of the last half of the Eighteenth Century; research abroad; tenure, twelve months from September 15, 1931.

Publications:  Contributor to The Reinterpretation of American Literature (edited by Norman Foerster), 1928. Poems of Freneau, 1929, edited with a critical introduction. Contributor to Humanism and America (edited by Norman Foerster), 1930. Articles and reviews in Modern Language Notes, Publications of the Modern Language Association of America, Studies in Philology, Philological Quarterly, American Literature, Encyclopaedia Britannica, The Bookman, Saturday Review of Literature, The Wisconsin Academy of Sciences, Arts and Letters, The Yale Review.