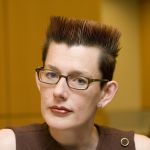 Heather Hendershot is the Coordinator of the Film Studies Certificate Program at The Graduate Center and a professor in the Media Studies department at Queens College. She is also a member of the Ph.D. Program in Theater at the Graduate Center. She received her Ph.D. from the University of Rochester and her B.A. from Yale University.

She is the author of Saturday Morning Censors: Television Regulation before the V-Chip (1998) and Shaking the World for Jesus: Media and Conservative Evangelical Culture (2004). She is also the editor of Nickelodeon Nation: The History, Politics, and Economics of America's Only TV Channel for Kids (2004). She is currently writing a book on right-wing broadcasting of the 1950s and 60s.

Profile photograph by A. Poyo.