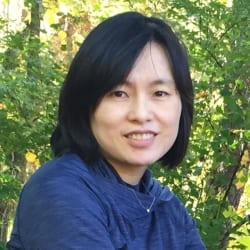 She held faculty positions in Princeton University, California Institute of Technology and Brown University, before returning to Yale University in 2013, where she is currently the Abraham Robinson Professor of Mathematics.

Her main areas of research include discrete subgroups of Lie groups, homogeneous dynamics, and its connections to number theory and geometry. In recent years, Hee Oh has been exploring the theory of dynamics on hyperbolic 3-manifolds of infinite volume, bringing together dynamics on homogeneous spaces, the geometry and topology of 3-dimensional manifolds and various subtle number-theoretic phenomena, for example, the distribution of primes.

Her recent honors include a talk at the ICM in 2010, a joint AMS-MAA invited address at the 2012 joint Mathematics meeting and a plenary lecture at ICWM in 2014. She was awarded the Ruth Lyttle Satter Prize in Mathematics in 2015. She is an inaugural fellow of the AMS and a 2017 Simons fellow in Mathematics.