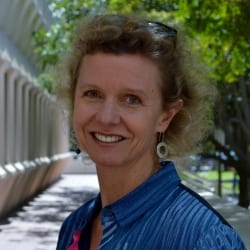 Heidi Tinsman is Professor of History at the University of California Irvine, where she teaches courses on modern Latin America, gender, labor, race, and world history. Her work brings feminist paradigms to bear on the history of agricultural workers; and over the years it has become increasingly transnational. Tinsman’s first book, Partners in Conflict: The Politics of Sexuality, Gender and Labor in the Chilean Agrarian Reform, 1950-1973 (Duke, 2002), explored the centrality of struggles over sex to the class conflict and peasant movements that brought Socialist President Salvador Allende to power. Her second book, Buying into the Regime: Grapes and Consumption in Cold War Chile and the United States (Duke, 2014), examined connections between Chile’s fruit-export boom during military dictatorship and the growing demand for “fresh and healthy lifestyles” in the U.S. in the 1980s. She co-edited the volume, Imagining Our Americas: Towards a Transnational Frame (Duke, 2007) with Sandhya Shukla, which argued for bridging area studies divisions between U.S.-American Studies and Latin American Studies. As a Guggenheim Fellow, Tinsman will be researching a new book on Chinese labor and masculinity in 19th century Peru, Cuba, Mexico, and Chile. She is interested in how the stories we tell about Latin America, and our very conception of ‘Latin America’ as a region, change when we see it as part of a Pacific World.

Tinsman received her B.A. from Princeton University and a Senior B.Phil. from Oxford University, where she studied as a Rhodes Scholar. She completed her Ph.D. at Yale University in 1996.