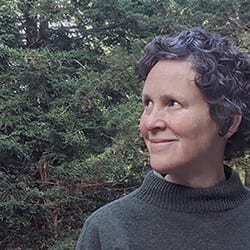 Currently, attendant in perception and proprioception while weaving and walking.

Walking is mostly in the foothills of Mount Tamalpais, usually as a circumambulation of its three small peaks.

The weaving is reciprocal with the walking. Standing with a small tapestry loom on an easel, with flexible parameters set by chance operations, the weaving provides a structure for movement through alternately extended arms. It is the playing of an instrument that doesn't make much sound, bringing about a material indication of a physical activity. Using the loom in a simple manner, not to its limits. Meeting it in a slow conversation, or non-conversation, that takes place in listening rather than in language.

This not-one, not-two circumstance is evidenced mostly in linen, without a surfeit of color. The resulting pieces – proofs – are near nothingness, whether as a distillation of sorts, or an amplification of less.