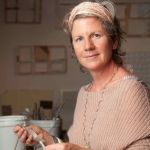 Artist Helen O’Leary was born in County Wexford, Ireland, and studied at the National College of Art and Design in Dublin before coming to the United States to continue her studies at the School of the Art Institute of Chicago (B.F.A., 1987, M.F.A., 1989) and the Skowhegan School of Painting and Sculpture. She joined the faculty of the School of Visual Arts at Penn State in 1991 and is currently a Professor of Art there.

She has participated in group exhibitions around the world, including at the National Gallery of Art in Limerick, Ireland; the Glasgow Museum of Art in Scotland; the Scott Pfaffman Gallery in New York City; the Galerie le Petit Port in Leiden, The Netherlands; the Contemporary Arts Centre in Sydney, Australia; and in Shanghai, China. The Zolla/Lieberman Gallery in Chicago; the Michael Gold Gallery in New York City; the Victorian College of the Arts in Melbourne, Australia; The Beverly Art Centre in Chicago; the Sanskriti Foundation in New Delhi, India; the Kerlin Gallery in Dublin, and the Catherine Hammond Gallery in Cork, Ireland, are among the many venues that have mounted solo exhibitions of her work.

Helen O’Leary’s art has been honored with two Pollock-Krasner awards (1989, 1996) and a Joan Mitchell Award for painting and sculpture ((2000); several grants from the Arts Council of Ireland; residencies at the Tyrone Guthrie Centre in Monaghan, Ireland, and the Fundacion Valparaiso in Almeria, Spain; and most recently both the Culturel Irlandaise and Guggenheim fellowships. She has also been a visiting artist in Ireland, at the National College of Art and Design in Dublin, GMT Galway, and the University of Limerick; in Scotland, at the University of Glasgow; in Australia, at Edith Cowen University in Perth and Victoria College of the Arts in Melbourne; as well as at several universities in the United States.

Long interested in the relationship between language and literature and art, she will be spending her Guggenheim Fellowship term in New York, Paris, and Berlin where she hopes to further explore the texts and letters of Samuel Beckett and shape her material response to them.

Growing up in rural Ireland in the 1960s through 1980s, I often heard my mother talking of the “big house” and the class system that was clearly in place, ending each story with “Their ways weren’t our ways”; later, when my family ran a boarding house, she would dismiss the tourists who stayed with us with the same comment. My childhood was defined by the “if you can’t make it, you can’t have it” Ireland, a place where making things—food, shelter, ornament—and making do were central to both the physical and emotional survival of the family. That reality and the resulting radical attitude to tradition, high-class impurity, and rascality inherent in the Irish culture of that time expressed itself not only in my mother’s words but in the language, literature, people, and music that surrounded me as an adolescent.

As a young painter this sensibility naturally carried over into how I looked at the modern masters, and to the questions asked of their conventions and their “ways.” I’ve always been most interested in the modest lyricism of the purely mundane, never feeling abstraction to be the sole province of the heroic and the cerebral. Throughout my career, I have been constructing a very personal and idiomatic formal language based in simple materials and unglamorous gestures, a framework which functions as a kind of syntactical grid of shifting equivalences. The “paintings” that emerge from this process know their family history, a narrative of greatness fallen on hard times. Yet, for all that, they remain remarkably un-defensive, wobbly, presuming no need to disavow the past or defy the present.

I work from memoir, stories of growing up on the farm in Wexford and my life now in the States, short stories that I then fashion from the archaeology of my studio. I work the studio as my father worked the farm, with invention out of need, using my own displacement as fodder for meaning. I take things apart, forgetting conventions and reapply my own story to the form. I revel in the history of painting, its rules, its beauty, its techniques, but fold them back into the agricultural language I grew up with. I’m interested in the personal, my own story, and the history of storytelling.

My new work delves into my own history as a painter, rooting in the ruins and failures of my own studio for both subject matter and raw material. I have disassembled the wooden structures of previous paintings—the stretchers, panels, and frames—and have cut them back to rudimentary hand-built slabs of wood, glued and patched together, their history of being stapled, splashed with bits of paint, and stapled again to linen clearly evident. The residual marks on the frames, coupled with their internal organization, begin to form a constellation of densities, implying an idiomatic syntax of organic fluctuation where compact spaces coexist with the appearance of gaping holes where the rickety bridges have given way. Formal and structural concerns become inseparable, the slippery organization of their fluctuating grids showing a transparency both literal and historical. With both serenity and abandon, these structures imagine the possibility that painting might take root and find a place to press forward into fertile new terrain.

Humorous, enigmatic, these fragments bare their histories as well-worn objects, and in that maintain a certain irrefutable integrity, speaking to both the strengths and frailties ingrained by hard use and the passage of time. What long remained hidden as merely the bones behind the image plane have been exhumed and remade into the tendons and sinews of the image itself. Through the process of deconstruction and reassembly, the pieces invert the conventional anatomical hierarchies of painting in an attempt to find what is fresh and vital among the entrails of the image. The paintings affirm over and over again in elegant fashion the pleasures of a demanding and nonjudgmental yet always self-conscious practice of painting that gives joy to the eye and substance to the spirit.

In Where Things Matter, one of my latest works, I was interested in painting that would stand up without the usual structures of support. I am looking at my own life, the history of Sean-nós singing in Irish music, Beckett’s pared-down language, and the currency of need found in most houses when I was growing up.