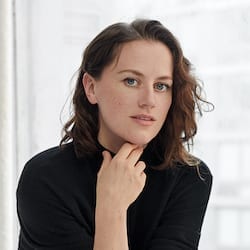 Helen Simoneau is the artistic director and choreographer of Helen Simoneau Danse. Originally from Québec, she earned a BFA at the UNC School of the Arts and a MFA from Hollins University, under the direction of Donna Faye Burchfield. Her commissions include The Juilliard School, Oregon Ballet Theatre, the American Dance Festival, BalletX, The Yard, Springboard Danse Montréal, The Ailey School, the University of the Arts (PA), and the Swiss International Coaching Project (SiWiC) in Zurich.

Simoneau was a resident artist at Baryshnikov Arts Center, NYU/Tisch, Bates Dance Festival, New York Dance Lab, The National Choreographic Center in Akron, the University of Buffalo via the Creative Arts Initiative, and has received fellowships from New York City Center, The NYU Center for Ballet and the Arts, the Bogliasco Foundation, Ailey’s New Directions Choreography Lab, and twice from the North Carolina Arts Council. Her work has toured nationally and internationally.

Simoneau was awarded 1st place for Choreography at the 13th Internationales Solo-Tanz-Theater Festival in Stuttgart, Germany. She has been called “a choreographer to watch” by The Washington Post.