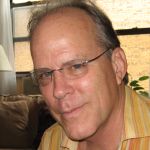 Henry Hills has been making concise, intensely rhythmic experimental films since 1975, work which seeks abstraction within sharply focused naturalistic imagery, the eternal within the temporal, and the ethereal within the mundane, promoting an active attentiveness through a relentlessly concentrated montage in order to spotlight and encourage the unique, the individual, and the heterogeneous, with the apocalyptic goal of countering the passive receptivity to noisy homogeneity almost-overwhelmingly enforced by a corporate culture seeking to create the perfect consumer.

Born in Atlanta, Georgia, he lived in San Francisco during the mid-70s where he received an M.F.A. from the San Francisco Art Institute and edited the vital and lively avant-garde film journal Cinemanews. The Pacific Film Archive is in the process of restoring two of his films from this period, Porter Springs 3 and Kino Da!

Moving to New York in 1978, he was immediately active within the Collective for Living Cinema, but drew his inspiration from poetry and music communities that were developing at the same time along similar lines that he was, the East Coast “language” poets and the “Downtown improvised music scene." He has continued to work over the years with similarly fixated artists, including poet Charles Bernstein, composer John Zorn, and choreographer Sally Silvers.

He received a 1982 grant from the National Endowment for the Arts (and additional support from the New York State Council on the Arts) to make a 16mm film originally called “Marxism and Form” which became Money, a composition of carefully selected but unusually brief fragments of artists’ conversations and performances filmed primarily on heavily congested Manhattan sidewalks in deep focus and assembled as an extreme and sustained collage of collective dialog and comparative collaboration, which seemed radical even crazy then, and still seems radical and crazy although now somewhat mediated by its condition and status as an unique historical document. The accompanying artist’s book, Making Money (Roof Books, 1985), is still in print. Anthology Film Archives recently received funds from the Andy Warhol Foundation to preserve the film in 35mm. In 1994 Hills received another NEA grant to co-direct (with Sally Silvers) Little Lieutenant, a dance film precisely if quirkily scored and choreographed to John Zorn’s eccentric arrangement in thirty parts of the Brecht/Weill song, “Der kleine Leutnant des lieben Gottes," which screened in dozens of film festivals worldwide. He has also received support from the New York Foundation for the Arts and the Jerome Foundation, as well as three residencies at the MacDowell Colony. Selected Films 1977-2008 will be available on DVD in June from Tzadik. Many of his films, including his extended exploration of digital possibilities from the zeros, Emma's Dilemma, are also available for free iPod-size downloads on the PennSound site.

Mr. Hills is currently teaching at FAMU, the Czech national film academy in Prague, where he also administers a visiting American filmmaker program through funding from the Trust for Mutual Understanding. His recent films Electricity (2007) and Failed State (2008) have screened in numerous international film festivals. He directed and is editing for DVD release in the near future a video of the recent Richard Foreman/John Zorn collaboration Astronome: A Night at the Opera. He is living during the school year in Vienna with his wife, Austrian documentary director and archivist Martina KudláÄek.