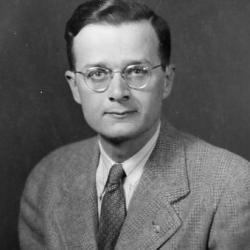 I was born in Germany on 28 February 1916, and after graduating from Gymnasium went to Florence to study Classics because of the German racial laws. In 1938 I received the degree of dottore in lettere with a thesis on Plato's concept of tyche, but then was awarded a fellowship to the American School of Classical Studies in Greece, a tenure which profoundly affected my academic life in that it put me in touch with the actual life as lived in ancient Greece(1939-40). In 1940 I came to the United States, received a PhD from Yale University (1943) and spent three years in the U.S. army, after which I was able to spend a year on a Guggenheim postwar fellowship (1946), the subject of which was a study of Athenian vase inscriptions. I taught for ten years at Yale (1947-57) and until 1977 at the University of North Carolina at Chapel Hill, retiring as Alumni Distinguished Professor of Greek to go to Athens as Director of the American School of Classical Studies for five years (1977-82). My major publications are Form and Thought in Herodotus (1966, etc.), Attic Script: A Survey (1990) (based principally on the vase inscriptions), and A Corpus of Attic Vase Inscriptions (last version, 2009), available on two websites:
www.unc.edu/~hri/Inscriptions.pdf and www.lib.unc.edu/digitalprojects.html.