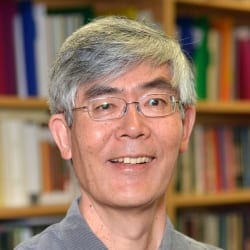 Hiroshi Motomura is the Susan Westerberg Prager Professor of Law at the UCLA School of Law. He is a leading scholar of immigration and citizenship law, with influence across a range of academic disciplines and in federal, state, and local policymaking.

Professor Motomura has addressed many of today’s pressing immigration policy issues in his scholarship. His book, Americans in Waiting: The Lost Story of Immigration and Citizenship in the United States (Oxford 2006), won the Professional and Scholarly Publishing (PROSE) Award from the Association of American Publishers as the year’s best book in Law and Legal Studies, and was chosen by the U.S. Department of State for its Suggested Reading List for Foreign Service Officers. He is a co-author of two immigration-related casebooks: Immigration and Citizenship: Process and Policy (8th ed. West 2016), and Forced Migration: Law and Policy (2d ed. West 2013), and he has published many widely cited articles on immigration and citizenship. His most recent book, Immigration Outside the Law (Oxford 2014), won the Association of American Publishers' Law and Legal Studies 2015 PROSE Award.

Motomura has served as co-counsel or as a volunteer consultant in numerous significant policy matters and litigated cases. He was the first Lloyd Cutler Fellow at the American Academy in Berlin, has served on the Board of Governors of the University of North Carolina Press, and is a member of the Editorial Board of the International Migration Review. He has received several teaching honors, including the UCLA Distinguished Teaching Award in 2014, and was one of 26 law professors nationwide profiled in What the Best Law Teachers Do (Harvard 2013).

While a Guggenheim Fellow, Professor Motomura will work on a book examining and connecting several of today’s most vexing immigration policy questions. First, are immigrants’ rights best understood by applying a framework based on civil rights, human rights, or something else? Second, how do mass migrations of people fleeing war, the breakdown of civil society, or environmental degradation challenge traditional perspectives on immigration? Third, what are the implications of admitting immigrants who have no path to citizenship? And fourth, how should economic inequality in a destination country influence its immigration policy?