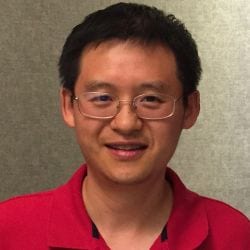 Hong Liu is a theoretical physicist at Massachusetts Institute of Technology. His research lies at the interface of string theory/quantum gravity, nuclear physics, and condensed matter physics. Questions he has been studying include quantum nature of black holes, non-equilibrium dynamics of quantum many-body systems, as well as turbulence.

Traditionally, gravity, nuclear, and condensed matter physics are regarded as remotely-connected disciplines with completely different sets of goals and physical laws. Remarkably, during the last fifteen years, stunning interconnections have emerged among them, with the unifying theme that strongly correlated many-body systems often exhibit universal behaviors which do not depend on the details of its constituents. Hong Liu’s research has helped establish and foster the interconnections among these disciplines. He was among the first to use string theory methods to study properties of the Quark-Gluon Plasma created at Brookhaven National Laboratory, and was among the first to point out possible deep connections between black hole physics and certain electronic properties of high temperature superconductors. He also shed new lights on superfluid turbulence, with the help of black holes. Recently using insights from string theory, he developed a complete formulation of fluctuating hydrodynamics, which had been a long-standing question.

Hong Liu grew up in Zhuzhou, a medium-sized industrial city in Hunan province, China. He received B.S. in 1993 from University of Science and Technology of China and Ph.D. in 1997 from Case Western Reserve University. He was a postdoctoral fellow at Imperial College and New High Energy Theory Center of Rutgers University, before joining the faculty at MIT in 2003. He was an Alfred Sloan Fellow, an Outstanding Junior Investigator of the Department of Energy, and a Simons Fellow. He has been an editor of Journal of High Energy Physics since 2010.