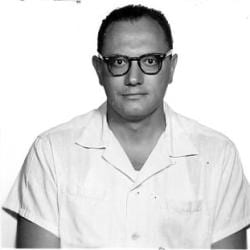 Two major events have directed my scientific career. When I was about 10 years old, I saw my first firefly. It was at Camp Northover, New Jersey, run by the Christodora Settlement House on the lower East Side of Manhattan. From then on I became fascinated with light, and with how in the world this little insect that I held in my hand could produce light, when the only sources of light in my experience came from hot objects; sunlight, incandescent lights, and colored neon lights.

From 1948 to 1958 I was a senior physicist in the Radioactivity Division of the National Bureau of Standards, Washington, D.C., specializing in the preparation and absolute measurement of radioactivity standards using ionization chambers and 4 pi counting chambers. During this time I enrolled part time (also under the GI Bill) at the University of Maryland and received my Ph.D. in physics (1954). At the NBS I developed a method of measurement of intensities of radioactive emissions by the light photons they produced in crystal and liquid scintillators coupled to sensitive phototubes, eventually leading to the ability to detect single photons. Later, at Johns Hopkins, I applied these techniques to measure the chemiluminescence of cigarette smoke. But I am getting ahead of myself.

At an international conference in France, W. F. Libby apparently heard my paper on radioactivity measurement and recommended me to the Guggenheim Foundation as a possible applicant for a fellowship. The award of the fellowship (1958) marked the definitive turning point in my career. I had heard that W. D. McElroy, Chairman of the Biology Department at The Johns Hopkins University, was working on the biochemistry of the light production by fireflies and had recently isolated the enzyme (luciferase) responsible for catalyzing the light reaction and the substrate (luciferin). Here was the perfect opportunity to apply my photon scintillation measurement techniques and spectroscopy expertise (physics) to the study of enzyme reactions in fireflies (biochemistry), the fulfillment of my lifelong fascination with the light emitted by fireflies. I came to see him, and within the hour he welcomed me into his department.

I spent my Fellowship year (1958) in the Biology Department, working with McElroy, and made the first measurement of the quantum yield of the firefly light reaction (~ 87%), using purified components—evidence of natural selection for optimization. From that first moment, I knew I had found an ideal home at Hopkins for my scientific career. It would encompass bioluminescence—of fireflies, and eventually of bacteria, phytoplankton, fish and ctenophore marine species, both in the laboratory studies and in their natural habitats to demonstrate natural selection for optimization.

We made the first measurements of the species-specific flash patterns of fireflies in their natural environment. We showed that the species-specific colors of the bioluminescence of fireflies represented natural selection for the optimization of the ratio of light signals to interfering ambient light intensities (noise) at the times of their emergence. In collaboration with the firefly entomologist Jim Lloyd and Bill Biggley (my assistant) we measured the emission spectra of more than 100 firefly species.

From studies of bacterial bioluminescence, I deduced a mechanism for the origin of bioluminescence in these simplest of organisms (excited states resulting from oxygenase reactions) a mechanism applicable to bioluminescence in all species. My preoccupation with correlating light with the behavior of biological organisms led to the study of blue and UV polarization sensitivity in foraging insects, and finally to the measurement of the precision of short-term and long-term color memory in humans as a possible sensitive diagnostic for memory loss.

In summary, I spent 10 years at the National Bureau of Standards learning and developing measurement techniques, and 40 years at Johns Hopkins (I am now Professor Emeritus), fulfilling my boyhood fascination with bioluminescence. I owe the Guggenheim Foundation my profound gratitude for making this career change possible. In addition, I have been fortunate, during my scientific career, to have been able to determine the directions of my research independently.