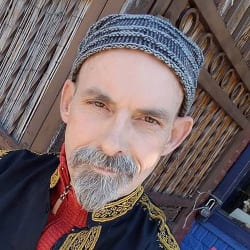 Hunter Reynolds is a visual artist and AIDS activist. He received his BFA in 1984 from Otis College of Art in Los Angeles where he was a part of the downtown art scene and formed his first performance collective called UNARM. He was an early member of ACT-UP and in 1989 co-founded Art Positive to fight homophobia and censorship in the arts. For over thirty years, Reynolds has been using photography, performance and installation to express his experience as an HIV-positive gay man. Reynolds’ work addresses issues of gender, identity, socio-politics, sexual histories, mourning and loss, survival, hope and healing.

Structuring, reordering, finding and building ways to arrange chaos in a compelling human context has been the central focus in Reynolds’ art. Through distinct series of performance projects and installations Hunter Reynolds has expressed his commitment to body politics including his drag alter ego Patina du Prey’s Memorial Dress, collaborations like the Banquet and I-Dea The Goddess Within, his activist Dialogue Tables, photo-weavings, Blood Spot and more recent mummification performances.