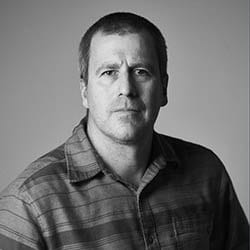 Ian van Coller was born in 1970, in Johannesburg, South Africa, and grew up in the country during a time of great political turmoil.  These formative years became integral to the subject matter van Coller has pursued throughout his artistic career. His work has addressed complex cultural issues of both the apartheid and post-apartheid eras, especially with regards to cultural identity in the face of globalization, and the economic realities of every day life.

Van Coller received a National Diploma in Photography from Technikon Natal in Durban, and in 1992 he moved to the United States to pursue his studies where he received a BFA from Arizona State University, and an MFA from The University of New Mexico. He currently lives in Bozeman, Montana with his wife, children, and three dogs, and is an Associate Professor of Photography at Montana State University.

His work has been widely exhibited nationally and internationally and is held in many significant museum collections, including The Philadelphia Museum of Art, The Getty Research Institute, The Metropolitan Museum of Art, The Library of Congress, and The South African National Gallery. Van Coller's first monograph, Interior Relations, was published by Charles Lane Press (New York) in 2011. He is a member of the Piece of Cake collective.

Van Coller's most recent work focuses on environmental issues related to climate change and deep time. These projects have centered on the production of large scale artist books, as well as direct collaborations with paleo-climatologists. Van Coller's Guggenheim Fellowship will be (motivated) by collaborations with scientists in Norway, Svalbard, Baffin Island, Greenland, Brazil, Chile, Antarctica, Nevada, Wyoming and Montana.