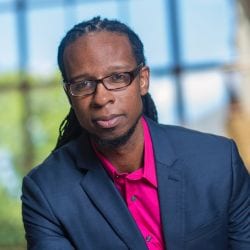 Ibram X. Kendi is a New York Times bestselling author and the founding director of the Antiracist Research and Policy Center at American University. A professor of history and international relations and a frequent public speaker, Kendi is a columnist at The Atlantic. He is the author The Black Campus Movement, which won the W.E.B. Du Bois Book Prize, and Stamped from the Beginning: The Definitive History of Racist Ideas in America, which won the National Book Award for Nonfiction. At 34 years old, he was the youngest ever winner of the NBA for Nonfiction. Stamped from the Beginning was a finalist for a National Book Critics Circle Award, and it was nominated for a Hurston/Wright Legacy Award and a NAACP Image Award. The Washington Post named Stamped from the Beginning the most ambitious book of 2016 and it made several Best Books of 2016 lists.

Kendi has published fourteen academic essays in books and referred journals, and op-eds in numerous periodicals, including The New York Times, The Guardian, Time, Black Perspectives, and The Washington Post. He has received research fellowships, grants, and visiting appointments from a variety of universities, foundations, professional associations, and libraries, including the American Historical Association, Library of Congress, National Academy of Education, Rutgers Center for Historical Analysis, Brown University, Princeton University, and Duke University. Kendi is the co-editor of the new Black Power Series with NYU Press. He was named to The Root 100 2017, which listed him as the 29th most influential African American between the ages of 25 and 45 and the second most influential college professor. His next book, How to Be an Antiracist, will be published on August 20, 2019 by One World, an imprint of Random House.