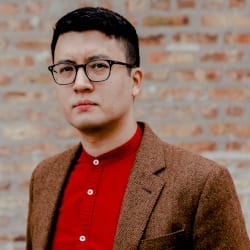 His recent works are centered on musical mimesis (the imitation of vocal and everyday sounds through live instruments), electroacoustic meta-instruments, and varied approaches to repetition.

Igor has earned degrees in Music Composition from the University of Chicago (Ph.D. 2018), the Eastman School of Music (M.A. 2012), and the University of South Florida (B.M. 2010). He has won first prizes in the Busoni Composition Prize, Luigi Nono International Competition, the RED NOTE Competition, second prize in the Salvatore Martirano Award, and was also awarded Best Sound Design from Theatre Tampa Bay.

A native of Curitiba, Brazil, Igor is currently based in Chicago, IL. In addition to writing concert music, he serves as Technical Director for Ensemble Dal Niente, and composes for theater productions throughout the US and Europe.