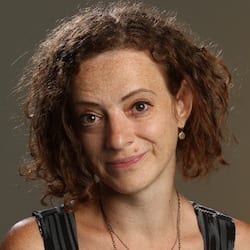 Irene Lusztig is a filmmaker and archival researcher. Her work mines old images and technologies for new meanings in order to reframe, recuperate, and reanimate forgotten and neglected histories. Often beginning with rigorous research in archives, her work brings historical materials into conversation with the present day, inviting viewers to contemplate questions of politics, ideology, and the production of personal, collective, and national memories. Her films include her debut feature Reconstruction (2001), the feature length archival film essay The Motherhood Archives (2013), and the performative documentary feature Yours in Sisterhood (2018). Her work has been screened around the world, including at the Berlinale, MoMA, Film Society of Lincoln Center, Pacific Film Archive, IDFA Amsterdam, Hot Docs, BFI London Film Festival, DocLisboa, and RIDM Montréal. She teaches filmmaking at UC Santa Cruz where she is Professor of Film and Digital Media.