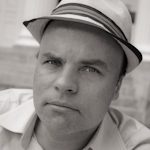 J. T. Rogers’s latest play, Blood and Gifts, debuted at the Royal National Theater in London last year and had its American premier this season at Lincoln Center Theater, where the play had been commissioned. His previous work, The Overwhelming, also debuted at the National. It then toured the U.K. with Out of Joint, was heard on BBC radio, and made its U.S. debut at the Roundabout Theatre. His other plays include White People (Off Broadway with Starry Night Productions) and Madagascar (Theater 503, London; Melbourne Theatre Company). As one of the original playwrights for the Tricycle Theatre of London’s The Great Game: Afghanistan he was nominated for a 2009 Olivier Award. His works have been staged throughout the United States and in Germany, Canada, Australia, and Israel, and are published by Faber and Faber and Dramatists Play Service. Recent awards include NEA/TCG and NYFA fellowships, the Pinter Review Prize for Drama, the American Theatre Critics Association’s Osborne Award, and the William Inge Center for the Arts’ New Voices Award. Rogers’s essays have appeared in American Theatre and in London’s Independent and The New Statesman. He is a member of New Dramatists and the Dramatist Guild and holds an honorary doctorate from his alma mater, the University of North Carolina School of the Arts.