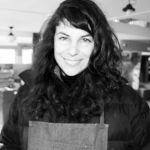 Jackie Saccoccio (born Providence, Rhode Island, 1963) was a painter, living and working in Connecticut and New York. She exhibited her large-scale abstract paintings and wall drawings throughout the United States and Europe, with exhibitions in 2012 at Eleven Rivington, New York City, and in the four-artist show Open Windows: Keltie Ferris, Jackie Saccoccio, Billy Sullivan and Alexi Worth, curated by Carroll Dunham at the Addison Museum of Art, Andover, Massachusetts. She received an M.F.A. in Painting and Drawing from the School of the Art Institute of Chicago and a B.F.A. in Painting from the Rhode Island School of Design. Saccoccio has taught at Brooklyn College, Cranbrook Academy of Art, Princeton University, and RISD. Recently Saccoccio served as Guest Curator at the RISD Museum of Art in Providence, Rhode Island, for Collision, an additive exhibition of seventeen artists. This was a restaging of Blue Balls, an earlier curatorial effort at Art Production Fund's LAB in New York City (2008). Saccoccio was awarded the Rome Prize in Visual Arts from the American Academy in Rome in 2005, a Fulbright grant to Italy (1990), and a residency at the Monet Foundation in Giverny, France (2004). Her work has been reviewed in Art in America, The Boston Globe, Frankfurter Rundschau, Gay City News, The New York Sun, The New York Times, The New Yorker, TimeOut, and The Village Voice, among other periodicals. Obituary