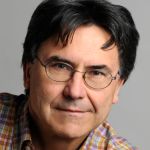 I was recently elected to the James D. Hart Chair of English at the University of California, Berkeley. It was particularly gratifying to be awarded a Chair named for a great library director, because my work often involves the material history of books and images, sixteenth through eighteenth centuries, and has appeared in The Book Collector and Print Quarterly as well as in more “Berkeley” journals like Representations. My first article, published when I was a doctoral student at Oxford (1972), explored the relation between pictures and words in an influential language textbook for children, the Orbis Pictus of Jan Amos Comenius. Since then I worked on various places where literature and art are deeply intertwined and rooted in the physical world. My first book concerned landscape, the countryside and the “green thought” that gave them shape and meaning. The Politics of Landscape: Rural Scenery and Society in English Poetry, l630-l660 (Harvard UP, l979) was written while I taught at Liverpool University in England and published after I moved to the University of Virginia. Feminism and sexual politics were very much in the air then, and I soon became involved in the historical study of sex and gender. I was especially fascinated by the libertines—mostly male but a few female—who equate sexuality with life, liberty, and the pursuit of happiness. Three books so far (and scores of articles) have examined different forms this drive has taken. My research was enabled by fellowships and grants from not only the Guggenheim Foundation but the National Endowment for the Humanities, among others, and by sabbaticals and fellowships from the University of Michigan and from Cal Berkeley, where I have taught as a Professor since 1990. The Guggenheim was the very first of these grants, awarded when I was still a new Assistant Professor, and it enabled me to do the research and thinking that sustained all three of my books on the history of sexuality.

Like the Hewlett Foundation that underwrites my endowed Chair, the Guggenheim Foundation has a crucial role to play, enabling humanities research at a time of disastrous cuts in public-sector support for higher education. Grants and subventions lift two heavy financial burdens that weigh on the kind of research I do, which always involves the original rare book and the original art object, wherever possible in the actual place it was produced: I mean the increasing costs of reproductions and travel. (Studying Renaissance erotica, by Raphael, Michelangelo, and their contemporaries, also means studying the Classical sculptures that the Renaissance fell in love with and the temples of Venus that they read about.) I am now making progress on the art book, and I plan over the next few years to finish some eighteenth-century essays and find my way back to my earlier interests, landscape and cityscape (perhaps a joint project with my wife Martha Pollak, the historian of architecture and urbanism). Meanwhile I am also using my Hart/Hewlett funds to encourage a new generation, by means of a summer stipend for graduate students researching in pre-1800 literature, visual culture, and the relation between them.