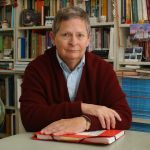 During the 1950s I received a B.A. in Foreign Languages (German and French) at Mississippi College in Clinton, Mississippi, and studied sociology privately at Tougaloo College, a traditionally black college, in Richland, Mississippi. From 1957-59 I was a Fulbright Scholar at the Gutenberg Universität in Mainz, in 1959 I attended the Deutsche Sommerschule at Middlebury College in Vermont, and from 1959-66 I was a graduate student in German and Russian at the University of Iowa where I received the M.A. and Ph.D. I have been a postdoctoral fellow in folklore at Indiana University in 1968 and at UCLA 1970-71, and have attended NEH Summer Seminars at the University of Texas and at Stanford University. My first faculty position was at the University of Wyoming in Laramie, followed by thirty-four years at Iowa State University. I served as Chair of my department at ISU from 1991-97, and a six-year term as Chair of the Cross-Disciplinary Linguistics Program. During my tenure there the university named me Distinguished Humanities Scholar for 2001-02, and I received the Liberal Arts and Sciences College Award for Excellence in Research/Creative Activity in 2001; I was honored with the Iowa Regents’ Award for Faculty Excellence 2003. Since 2005 I have been retired.

My research program has focused on German and Austrian folklore, bibliography, and sociolinguistics of the Old Order Amish. I have written and/or edited sixteen books, I have been guest editor for special issues of two journals, I have contributed several dozen articles and book chapters to refereed journals in the USA, Germany, Austria, England, Sweden, Mexico, and Japan. I have published translations into English and into German, given about fifty papers at local, national, and international conferences in the USA and Europe, and I have written numerous book reviews. I have also been Visiting Professor two times in Germany.

My research and publications have long been concentrated in three specific areas. First, much of my effort has been devoted to transmitting the theoretical developments in German Volkskunde/folklore to the English-speaking world, and recently I expanded this to include Austria. All of my professional career has been devoted to the disciplines of folklore and linguistics in one form or another, and I am an active member of German, Austrian, and American professional societies. Second, I have been intensively involved in indexing the activities of folklorists and linguists in Europe, Asia, and the USA, through my editorship of the Internationale Volkskundliche Bibliographie (1978-88; computerized under my editorship), in my position as Senior Bibliographer and Section Head of volume 5 (Folklore) of the MLA International Bibliography, and as a member, Chair (1992), and Secretary (2003-04) of the MLA Bibliography Advisory Committee. Third, I have done extensive linguistic fieldwork among the German-speaking populace of Iowa, specifically the Old Order Amish of Kalona and the Amana Colonists of Amana, Iowa. I have investigated the earliest historical records of the Amana Colonists, around 1715, published several works on Amish preaching styles, and have been called on two times to produce a Festschrift for major scholars in linguistics: Joshua A. Fishman and Werner Enninger. During my 2005 Guggenheim Fellowship term, I prepared and edited a comprehensive grammar of the Cymbrian language, a Bavarian-Tirolean dialect spoken in northern Italy since the eleventh century. The previous year, I was a Fellow of the American Folklore Society.

Among my other honors are a Fulbright Scholarship to Mainz, Germany (1957-58; renewed for 1958-59); a Middlebury College Summer Scholarship (Summer 1959); NEH Summer Seminar in “Oral Literature” – University of Texas 1980 (Richard Bauman), NEH Summer Seminar in “Language Maintenance and Language Shift” – Stanford 1984 (Joshua Fishman), and NEH Summer Stipend – Summer 1987; I was named the Distinguished Foreign Language Alumnus by Mississippi College in 1995. The Universität Essen (1990) and Universität Bremen (2003) invited me to be a Guest Professor in 1990 and 2003, respectively, and in the Spring of 2002 I was Korrespondieres Mitglied des Vereins für Volkskunde in Vienna.

Currently, I am working on two projects: a study tentatively titled Wyoming Folklore from the WPA, co-authored with Roger Welsch, which will be published by the University of Nebraska Press in 2010; and I will be contributing an article entitled “Germany” to the Oxford University Press publication Language and Ethnic Identity, edited by Joshua A. Fishman and Ofelia Garcia (forthcoming, 2010).