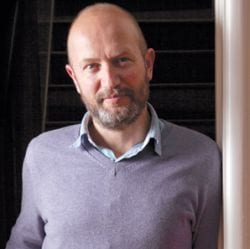 James Vernon is a Professor of History at the University of California, Berkeley. Born in Britain in 1965, the system of social democracy, which sustained his generation with free healthcare and K-16 education, was probably disintegrating as he grew up. Certainly, by the time he arrived at the University of Manchester to study Politics and Modern History in 1984 during the infamous Miners’ Strike, it was fast unravelling. As a Guggenheim Fellow he will explore whether it makes sense to characterize late twentieth century Britain as having been transformed by what is now often referred to as neoliberalism.

He will do so by writing a micro-history of Heathrow Airport. Heathrow was a laboratory for many of the characteristics we associate with neoliberalism – the deregulation and privatization of industry and security systems, the growth and outsourcing of highly gendered and racialized forms of labor, the explosive growth of the service, retail and finance sectors, as well as the emergence of an environmental politics addressing climate change and sustainability. He is interested in the way these developments were influenced by the world beyond Britain: by decolonization, bilateral agreements, European regional policies, and international regulations, to say nothing of the global traffic of travelers, cargo, capital, labor, security technologies and fuel. Most of all he is interested in how neoliberalism depended upon a particular type of post-imperial social formation that ordered the life of Heathrow’s employees and local residents.

James Vernon is the author of Politics and the People (Cambridge University Press, 1993), Hunger. A Modern History (Harvard University Press, 2007), Distant Strangers. How Britain Became Modern (University of California Press, 2014) and Modern Britain, 1750 to the Present (Cambridge University Press, 2017). He is editor of Rereading the Constitution (1996) and ‘The Berkeley Series in British Studies’ with University of California Press, as well as co-editor (with Simon Gunn) of The Peculiarities of Liberal Modernity in Imperial Britain (2011) and (with Colleen Lye and Christopher Newfield) “The Humanities and the Crisis of the Public University” in Representations (2011). His work has been supported by the British Academy, the Economic and Social Research Council (UK), the ACLS and the NEH. He is on the editorial board of Social History, Twentieth Century British History and the Journal of British Studies. You can follow him on twitter @James11Vernon