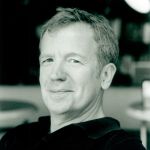 In 1999, Jamie James left behind a successful career as a freelance critic and travel writer in New York to come to Bali to live. Since he made the move he has published two novels, Andrew & Joey: A Tale of Bali (Kensington, 2002) and The Java Man (Metafor, 2004); The Snake Charmer, a biography of the contemporary American herpetologist and explorer Joe Slowinski (Hyperion, 2008); and most recently Rimbaud in Java: The Lost Voyage (EDM, 2011), a blend of speculative biography and literary criticism that describes the lost year of the poet’s life, 1876, when he absconded from Paris for a wandering tour of the Indonesian archipelago. Almost nothing survives in the record about this adventure. Reviewing the book for Harper’s, Zadie Smith praised “the spectacle of reading someone write beautifully about something he finds, well, beautiful.”

Before his move to Indonesia, James published two books about archaeology; Pop Art, a survey of the movement commissioned by Phaidon Press (1996); and The Music of the Spheres: Music, Science, and the Natural Order of the Universe (Grove Press, 1993). The composer Robert Saxton, reviewing The Music of the Spheres in the Times Literary Supplement, called it “an important and well-researched book—essential reading.”

At present Jamie James is writing a book under contract to Farrar, Straus and Giroux, tentatively entitled The Glamour of Strangeness, about the lives and works of expatriate artists who adopted the culture of their newfound home as their own. The principal subjects range from classic exemplars of the phenomenon such as Paul Gauguin and Paul Bowles, to lesser-known artists, writers, and filmmakers who have been overlooked on account of their ambiguous nationality, including the Javanese painter Raden Saleh (1811–1888), the German artist Walter Spies (1895–1942), the French poet, novelist, critic, and ship’s surgeon Victor Segalen (1878–1919), and Maya Deren (1917–1961), the American experimental filmmaker who went to Haiti to make a film about neo-African dance and ended up becoming a mambo, or Voudou priestess.