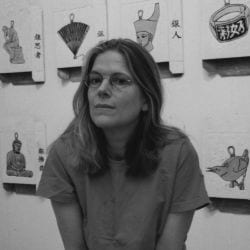 Jane Hammond studied science and art history as an undergraduate, earned an MFA in sculpture and moved to New York in 1979 where she began making drawings which segued into painting. She developed a set of ideas which involved using a lexicon of found images in a re-combinative process to create fictions from facts --- the facts being the found images. She defined her body of work as de-centered and discursive. She thought of her process as emanating from a system which was acting as a surrogate for style—instead seeking heterogeneity and variability.

These basic tenets produced nearly thirty years of painting, and along the way she has made a significant commitment to works on paper—both prints and unique pieces.

In 2005 she began making photography—inventing a process in which she collages elements from many found vernacular photographs and merges them with each other and with photographs she takes herself, both set-up and documentary, to create wholly new fictional narratives. These digitally assembled collages are turned into negatives and ultimately printed as silver gelatin prints.

In 2009 this photographic work began to re-inform her painting and she created the “Dazzle Paintings” out of a desire for new materiality that spoke to her time spent looking at images on screens: spectral, disembodied and glowing.

Hammond was born in 1950 in Connecticut and received her B.A. from Mount Holyoke College in 1972. She earned her M.F.A from the University of Wisconsin in Madison in 1977. Hammond moved to New York City in 1980 and had her first solo exhibition in 1989 at Exit Art, NYC. She’s had 18 solo exhibitions in New York City and additional solo exhibitions in Paris, London, Stockholm, Barcelona, Milan, Amsterdam, Chicago, Los Angeles, San Francisco and Detroit among others. She’s had twenty nine solo museum exhibitions at such venues as: the DeYoung Museum in San Francisco, Wexner Center for the Arts, Detroit Institute of the Arts, MCA Denver and Johnson Museum of Art at Cornell University. Hammond’s work is included in over 70 public collections including Museum of Modern Art, Whitney Museum of American Art, Metropolitan Museum of Art, MFA, Boston, National Gallery of Art, Washington, DC, Art Institute of Chicago; San Francisco Museum of Modern Art, J.Paul Getty Museum, Los Angeles, Yale University Art Gallery, Biblioteque Nationale, Paris and Albertina, Vienna. Hammond currently lives and works in New York City where she is represented by Galerie Lelong.