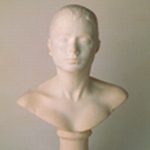 Utilizing her body as her primary tool, Janine Antoni makes work that blurs the distinction between performance art and sculpture.

For example, in 1993 for the Venice Biennale’s Aperto exhibition, she sculpted Lick and Lather, a work made up of fourteen self-portrait classical busts, seven in chocolate and seven in soap. She reshaped her image by licking the chocolate and washing the soap. In 2000, for her work 2038 she bathed in a bathtub that was used as a water trough from which cows drank. When the picture was taken it appeared as if Antoni was nursing the cow, bringing their relationship full circle. The tag in the cow’s ear both names the work 2038 and reveals its identity as a biological machine. The tenderness of the image exists in contrast to this reality. And in 2002, after extensive preparation learning to walk on a tight rope, Antoni created the video installation Touch. Filmed at the seashore directly in front of her childhood home on the island of Grand Bahama, the video shows Antoni attempting to walk a tight wire across the horizon where the water meets the sky. Under her weight, the wire dips to touch the horizon. She balances there for just a moment. More recently, in 2010, she created Yours truly, a love letter scribbled on a page from the exhibition guide and written from the perspective of a fictional artwork in the show, that is smuggled into the belongings of exhibition visitors for them to discover later. The letter speaks of a supposed encounter between the viewer and an artwork, describing the intimacy and intensity of the moment, conflating sexual attraction with attraction to art. By endowing the artwork with the ability to feel and be touched by the viewer, Antoni plants a seed that may change the way the viewer approaches art in the future.

As she explained to Douglas Dreishpoon in an interview in Art in America (23 October 2009), “I long for connection and see my objects as occupying the space between the viewer and myself. To be intimate with the object is to touch the viewer. . . . This direct physical experience is one of the rare things that art can offer in a culture of mediation.”

In addition to her Guggenheim Fellowship, Ms. Antoni has been honored with numerous awards, including a MacArthur Foundation Fellowship (1998), the Joan Mitchell Foundation Painting and Sculpture Grant (1998), and Boston’s Institute of Contemporary Art’s New Media Award (1999).

Educated at Sarah Lawrence College (B.A., 1986) and the Rhode Island School of Design (M.F.A. in sculpture, 1989), Ms. Antoni has been an adjunct faculty member in the graduate program of Columbia University’s School of Visual Arts since 2002. She has been an invited speaker or visiting artist at such prominent institutions as Yale University, RISD, VCU, and Monash University in Melbourne, Australia. In 2003 she received the Award for Artistic Achievement from RISD’s Alumni Association and an honorary Ph.D. in fine art from the Monserrat College of Beverly, Massachusetts. Also in 2003 Janine Antoni was featured on the PBS series Art:21, in the episode “Loss & Desire.”