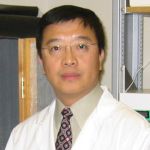 Dr. Yuan received his medical degree from Suzhou Medical College (1983). His Ph.D. in physiology (1993) was granted jointly by Peking Union Medical College and the University of Maryland, Baltimore; he was a postdoctoral Fellow at the latter from 1988 to 1991.

The World Health Organization, American Thoracic Society, Chinese Association for Physiological Sciences, the United Kingdom’s Royal Society, and the Instituto Juan March De Estudios e Investigaciones in Spain are but a few of the organizations that have invited Dr. Yuan to lecture, and he has been a visiting professor at many institutions in the U.S. and around the world, including the University of Oxford, Imperial College London, King’s College London, Chinese Academy of Medicine, Albert Einstein School of Medicine in New York City, the University of Chicago, and Dartmouth Medical School.

During his Guggenheim Fellowship term, Dr. Yuan undertook a study of the role of ion channels in human embryonic stem cell proliferation and differentiation, with a goal of furthering understanding of the pathogenic and therapeutic roles of stem cells in pulmonary vascular disease.