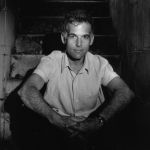 Jay Rosenblatt is an internationally recognized artist who has been working as an independent filmmaker since 1980 and has completed over twenty-five films. His work explores our emotional and psychological cores. They are personal in their content yet universal in their appeal. His films have received over 100 awards and have screened throughout the world. A selection of his films had theatrical runs at the Film Forum in New York and at theaters around the country. Eight of his films have been at the Sundance Film Festival and several of his films have shown on HBO/Cinemax, the Independent Film Channel, and the Sundance Channel. Articles about his work have appeared in the Sunday New York Times Arts & Leisure section and its weekday issues, the Los Angeles Times, Filmmaker magazine and the Village Voice. In addition to a Guggenheim Fellowship, Jay is a recipient of a USA Artists grant and a Rockefeller Fellowship.

Jay is originally from New York and has lived in San Francisco for many years. Since 1989, he has taught film at various universities in the Bay Area, including Stanford University, San Francisco State University, and the San Francisco Art Institute. He has a Master’s Degree in Counseling Psychology and, in a former life, worked as a therapist. For an article about Jay’s work, see Senses of Cinema, Issue 53.

* Brain In The Desert (1990) co-directed with Jennifer Frame