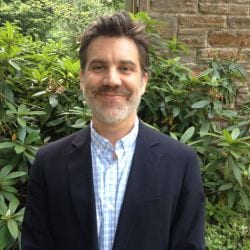 Jed Esty is the Vartan Gregorian Professor of English at the University of Pennsylvania. He is the author of Unseasonable Youth (Oxford, 2012) and of A Shrinking Island (Princeton, 2004). He has been a fellow of the American Council of Learned Societies and the National Endowment for the Humanities. His research and teaching interests include the novel in English; modernist studies; the cultural history of colonialism and decolonization; and economic/political approaches to literary genres. He is currently writing a short book on the rhetoric of imperial nostalgia entitled Declinism, Anglo and American.

Esty’s Guggenheim project is called Cold War Victorians: How the British Imagination shaped American Power. It surveys the trans-Atlantic trade in popular narrative forms that has defined the shared dreamworld of the Anglo superpowers since 1880. Most of the major genres of popular fiction currently enjoyed by American (and not just American) readers and film audiences have their roots in the late Victorian period in Britain. Looking at the westward flow of spy novels, detective stories, alien invasion plots, imperial adventures, treasure quests, historical romances, and science fiction tales, Cold War Victorians follows the baton pass from one Atlantic empire to another. It is a study in the relationship between global power and the symbolic ambitions of the Anglophone media, organized to address a central question: how did British notions of imperial destiny come to shape the American mind?

The project is motivated by the belief that the cultural life of the superpowers remains a pressing matter – all the more so since 2016’s epochal US elections (and the Brexit vote). We now look backward to European hegemony and forward, perhaps, to Asian hegemony from what many believe is a twilight stage of American influence. But our thinking about the imaginative dimensions of global power remains shrouded in political fantasy and rooted in outdated forms of Anglophilic nostalgia or American exceptionalism. Cold War Victorians aims to give a new, stereoscopic account of modernity’s two great English-speaking dream factories, taking as core evidence their characteristic modes of storytelling and their overlapping control of the genre system itself. Moving broadly from British fiction to American film, it revisits a set of classic narrative genres as they are modernized, Americanized, and adapted into visual media across the long arc from Pax Britannica to the American Century.