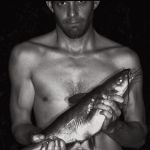 Jeff Whetstone was born in Chattanooga, Tennessee, and has been photographing and writing about the relationship between man and nature since he received a zoology degree from Duke University in 1990.  Mr. Whetstone served for five years as an artist-in-residence at Appalshop, Inc., a media arts center located in the coalfields of eastern Kentucky.  While working at Appalshop, he was the project director for the Before the Flood exhibition that premiered at the National Folk Festival.  His photographs and writing have been featured in Southern Changes, DoubleTake, Southern Exposure, Daylight Magazine,  and elsewhere.  After receiving his M.F.A. in photography from Yale in 2001, he was awarded the prestigous Sakier Prize for photography.  Since then, his work has been exhibited internationally and received reviews in The Village Voice, New York Times, New Yorker Magazine, and the Los Angeles Times.   Mr. Whetstone received his Guggenheim Fellowship for a body of work entitled "New Wilderness,"  and in 2008 he was awarded the Factor Prize for Southern Art.