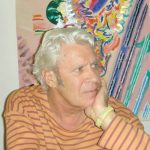 Born in 1940, Jeffery Beardsall spent his childhood and youth in Wales and Sheffield, where in 1960 his artistic education started at the Sheffield College of the Arts. Three years later he moved on to the renowned Slade School of Fine Arts (University College London) where he studied with Frank Auerbach, Sir William Coldstream, and Anthony Gross. On completing his Fine Arts Graduation and his Postgraduate in Printmaking in 1967, he established Studio Prints I in London, but moved to New York City two years later, where he set up Studio Prints II and started to make a name for himself by printing original monotypes for Robert Motherwell and etchings for Salvador Dali.

During the next decade, Beardsall focused more and more on his own creative work, developing the process for printing monotypes on paper and canvas that proved seminal to his evolving artistic vision. His special method of folding and printing on paper and canvas, which allows monotypes on paper and canvas up to a size of 7 x 7 feet, and his use of powder colors helped win him his 1975 Guggenheim Fellowship. Inspired by his travels in Guatemala and Mexico, he moved from the pure abstract monotype to abstract painting on monotype, the monotype being used as background.

As he has explained it, his interest lies in using the whole sheet of the “folded” monotype and not in restricting himself solely to the middle of the paper. In this way the paper itself is a key element, together with the color and the fold, of his work. Also of particular importance is the synergy and brilliance of the entire spectrum of colors which the artist uses to transmit a luminance and energy to the viewer.

Chance plays as great a role as premeditated design. The unanticipated qualities and varying thicknesses emerging from the use of pigments, oil paints, and acrylic in a kaleidoscope of colors invite the viewer to share the intense experience of his work. His object is “To make colors sing. . . . I want people to be able to enter the painting by the emotion of colors, movement—and not by theories of someone talking about my work.”

Tired of the New York art scene, Beardsall relocated to Stuttgart, Germany, in the 1980s. While continuing his work on paper and canvas, he began experimenting with metal and clay sculptures, inspired by his travels through North and Central America, Africa, and Europe. Among the resulting works were his Welsh series and Beaches of Europe.

Beardsall’s art has been exhibited extensively in the U.S., including at Gimpel & Weitzenhoffer Gallery, Payson & Weisberg Gallery, and the Museum of Modern Art Towers in New York City; Yale University; the Mark Twain Library in Redding, Connecticut; and at various venues in California, Ohio, Florida, and Virginia. MB Art in Stuttgart; Gallery Kutter in Luxembourg; Saarländischer Rundfunk in Saarbrücken; and the European Parliament in Strasbourg have also shown his work. Examples of his art are in the permanent collections of the Musee d’Art et Histoire in Geneva, Switzerland; the Whitney Museum of American Art and the Museum of Modern Art Towers, both in New York City; and the Staatsgalerie in Stuttgart.