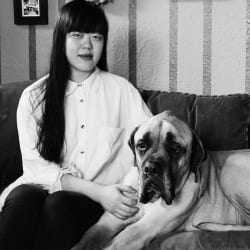 Jen Liu is a New York-based visual artist working in video, performance, and painting, on topics of national identity, economy, and the re-motivating of archival artifacts. Her most recent video, The Pink Detachment, premiered in the 2016 Berlinale Forum Expanded exhibition, and her recent performance commission for six dancers, The Red Detachment of Women, premiered at the Whitney Museum in mid-2015. In these pieces as in all her work, the question of gender’s intersection with cultural fantasies and racial anxieties are revealed in economic and industrial language, props and costumes take tropes to their humorous extreme, and wide variances in knowledge are juxtaposed for satirical effect.

She has presented work at The New Museum, Sculpture Center, and Issue Project Room, New York; Royal Academy and ICA in London; Kunsthaus Zurich; Kunsthalle Wien and das weisse haus, Vienna; the Aspen Museum of Art; Henry Art Gallery, Seattle; MUSAC, Leon; as well as the 2014 Shanghai Biennale (China) and the Coreana Museum in Seoul, Korea – among others. She has also received multiple grants and residencies, including Akademie Schloss Solitude, Stuttgart, Germany; Sommerakademie, Bern, Switzerland; de ateliers, Amsterdam, NL; and the Pollock-Krasner Foundation, New York. Last year, she was a resident artist at Para Site in Hong Kong and LMCC Process Space on Roosevelt Island, and this year she is a resident artist at Tulsa Artist Fellowship in Tulsa, Oklahoma.

Parallel with her art practice, Jen continues to lecture at Parsons New School Fine Arts at both the undergrad and graduate levels, and will begin a new course at NYU in fall 2017, on race politics in art materiality.