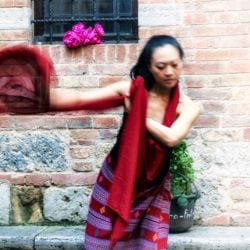 Shyu has produced seven albums as a leader, including the first female-led and vocalist-led album Pi Recordings has released, Synastry (Pi 2011), with co-bandleader and bassist Mark Dresser. Her critically acclaimed Sounds and Cries of the World (Pi 2015) landed on many best-of-2015 lists, including those of The New York Times, The Nation, and NPR. Her latest album Song of Silver Geese (Pi 2017) is receiving rave reviews and was also included on The New York Times’ Best Albums of 2017.

Even with the acclaim she has received for her recordings, Shyu is just as renowned for her dynamic performances. Ben Ratliff wrote in The New York Times that her concerts are "the most arresting performances I’ve seen over the past five years. It’s not just the meticulous preparation of the work and the range of its reference, but its flexibility: She seems open, instinctual, almost fearless." Her duo performance with Tyshawn Sorey was among The New York Times’ Best Live Jazz Performances of 2017. Larry Blumenfeld wrote in the Wall Street Journal that “her voice, a wonder of technical control and unrestrained emotion, tells a story dotted with well-researched facts and wild poetic allusions. She claims both as her truths.”

Currently based in New York City, Shyu is on the Artistic Advisory Council of Roulette Intermedium and is a member of the We Have Voice Collective, which released its Code of Conduct for the Performing Arts on May 1, 2018. She premiered her latest solo work Nine Doors at National Sawdust June 29, 2017, kicking off a 50-state U.S. tour of “Songs of Our World Now / Songs Everyone Writes Now (SOWN/SEWN),” planting seeds of creativity and threading communities together through art and cultural exchange. Jen Shyu is a Steinway Artist.