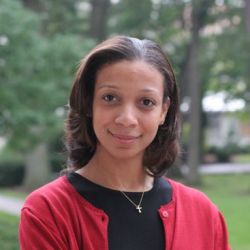 Jennifer A. Richeson is the John D. & Catherine T. MacArthur Professor of Psychology at Northwestern University, where she is also a Faculty Fellow at the Institute for Policy Research and Professor of African American Studies. She received a Sc.B from Brown University, and a MA and Ph.D. in social psychology from Harvard University. Prior to joining Northwestern University in 2005, she taught in the Department Psychological and Brain Sciences at Dartmouth College, and was a visiting fellow at Stanford University's Research Institute of Comparative Studies in Race and Ethnicity.

Professor Richeson’s research examines psychological phenomena related to cultural diversity. Her work generally considers the ways in which socio-cultural group memberships such as race, gender, and socio-economic status shape the way people think, feel, and behave, especially during interactions with members of different socio-cultural groups. She is currently working on three primary lines of research: 1) the dynamics and consequences of interracial contact; 2) detecting, confronting, and managing the threats associated with diversity and experiencing prejudice; and 3) social identity management in the face of intergroup wrongdoing. During the Guggenheim fellowship period, she will integrate the insights from these lines of research with relevant literature in organizational psychology, sociology, and political science in a book project on the paradox of diversity—that is, how actual and perceived increases in racial/ethnic diversity can yield both more egalitarian and more exclusionary racial attitudes, and, similarly, engender mixed outcomes in important life domains (e.g., social isolation, creativity, task performance).

Through her research and teaching, Professor Richeson hopes to contribute to a better understanding of intergroup relations, as well as to elucidate pitfalls in current approaches to managing diversity.