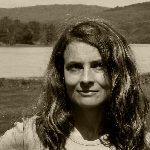 He died first.  She died second.  He was an early riser.   She was a night owl.  He slathered mile high slabs of butter on his toast, brought her breakfast in bed, called her “honey."  He wore a bag on his gut.  She was infertile and wickedly sarcastic.   She put lemon zest in raisin pie.  He had a horse named Dan.  She had four poodles.  Ahab, Anthony, Anita, Allegra.  She wore her glasses around her neck.  She told me to watch out for those religious people even though she knew I was religious.  She got pissed at me when I said someone passed away.  She said, “They DIED.”  She called her paintings her “uglies."  One day he fell in the tub and couldn’t get up.  She pulled him out. 90 lbs  versus 200 lbs.  She didn’t like my husband.  When she died she willed to me the antique mirror my uncle wanted.  I look into it today—divorced, semi-religious, holding a lemon.