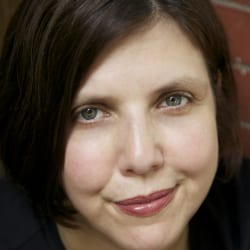 Jenny Offill is the author of two novels. Her first novel, Last Things, (FSG 1999) was selected as New York Times Notable Book and was a finalist for the LA Times Award for First Fiction. Her second novel, Dept. of Speculation (Knopf, 2014) was chosen as one of the top ten books of the year by the New York Times Book Review and was shortlisted for the Folio Award, the LA Times Book Award and The Pen/Faulkner Award. It has been translated into eleven languages.

In addition, she has written several books for children. The most recent, Sparky, (Schwartz & Wade) received the 2015 Charlotte Zolotow Award and has been adapted into a play.

She is also the co-editor of two collections of literary essays, The Friend Who Got Away (Doubleday, 2005) and Money Changes Everything, (Doubleday, 2007), which she produced in collaboration with the novelist, Elissa Schappell.

Jenny Offill was the recipient of 2006 NYFA award and won the Ellen Levin Award for a novel-in-progress in 2012.

She is currently a visiting writer in the MFA program at Syracuse University.