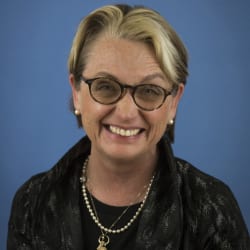 Jerrilynn Dodds is Professor of the History of Art at Sarah Lawrence College. Her work has centered on how individuals and groups form identities through art and architecture, and much of that work has focused on artistic identity in Medieval Spain. It is her hope in particular to complicate the notion that religious groups are separate and unchanging, and to reveal a wider scope of artistic expression for minorities, or for those who were politically subordinated. Most recently, in Arts of Intimacy: Christians, Jews and Muslims in the Making of Castilian Culture, co-authored with her late, lamented colleague María Menocal and with Abigail Krasner Balbale, Dodds worked to reveal artistic and historical identities that were a palimpsest of changing and at times contradicting perceptions and expressions.

She began inquiries like these with a 1990 book, Architecture and Ideology of Early Medieval Spain, and was subsequently able to probe and expand her view of these interactions in a series of exhibitions with extraordinary institutions: Al Andalus: The Art of Islamic Spain (with Daniel Walker, at The Metropolitan Museum of Art and The Royal Palace of the Alhambra in Granada, Spain, 1992); Convivencia: Jews, Muslims and Christians in Medieval Spain (The Jewish Museum, with Vivian Mann and Thomas Glick, 1992) to name only two. At the same time, she had the opportunity to write and direct a series of films regarding interconfessional identity in art and architecture: Journey to St. James: A Pilgrim’s Guide 1993, (winner of a MUSE Award for a Film on Art); An Imaginary East, 1995 (winner of a Cine Golden Eagle Award, and a Muse Award for an Exhibition Film); NY Masjid (1996); Hearts and Stones: The Bridge at Mostar (2004); and a screenplay for Canal+ Espana.

In 1993, engagement with the anguishing political events of the time drew her into a series of more contemporary topics that deepened and complicated her understanding of both her own world, and her Medieval subjects. Dodds joined a number of scholars and architects engaged in the problems surrounding the terms and meanings of the purposeful destruction of Ottoman monuments in Bosnia. Because a significant portion of the popular discourse concerning the Bosnian wars assumed irrevocably polarized cultures defined by religion, this work both connected with and expanded her view of the interactions she had studied on the Medieval Iberian Peninsula. A series of articles, a co-authored book (Reclaiming Historic Mostar, with Amir Pasic, 1999); and a film: Hearts and Stones: The Bridge at Mostar, emerged from this work.

At the same time, while teaching at City College, Jerrilynn encountered students with a rich experience of New York’s diverse urban fabric who introduced her to the nearly hundred mosques of the five boroughs of New York City. This would lead to an exhibition and book (NY Masjid, the Mosques of New York, 2002) produced in collaboration with them.

These projects in Bosnia and New York City provided a vocabulary and paradigms for probing the presence of ambivalence and hybridity in Medieval, as well as in 19th and 20th century arts. These would be useful tools for writing Arts of Intimacy, a book the authors hoped would speak to a broader, post 9/11 public, and for subsequent studies as well. The gifts of this wide-ranging research and collaboration have fueled Dodds’ present research, and the project in which she will now engage.