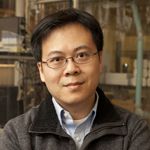 Jiaxing Huang is an associate professor of materials science and engineering at Northwestern University. His research interests are in material chemistry, processing, and manufacturing.  Examples include two-dimensional (2D) soft materials, organic nanocrystals, and metal nanostructures. He is interested in the application of these materials in energy and sustainability and as a platform for materials education. Huang has been honored with the IUPAC Young Chemists Prize, an NSF CAREER Award, an Alfred P. Sloan Research Fellowship, and the Outstanding Young Manufacturing Engineer Award from the Society of Manufacturing Engineers. He received his B.S. degree in chemical physics from the University of Science and Technology of China (USTC) in 2000 and his Ph.D. in chemistry from the University of California, Los Angeles (UCLA), in 2004. Huang then became a Miller Research Fellow at the University of California, Berkeley, before joining Northwestern in 2007.

Huang made his first independent materials discovery in 1999 as an undergraduate in Yi Xie’s lab at USTC, combining chemical reactions (found in two separate textbooks) to synthesize hollow spheres made of semiconductor nanoparticles. This curiosity-driven discovery led to Huang’s development of a new methodology now used by many other researchers, triggering a chain of additional discoveries in nanomaterial synthesis. After moving to UCLA for doctoral studies, he joined the laboratory of Richard Kaner, who introduced him to conducting polymer polyaniline, a cheap plastic material that can conduct electricity upon doping with acid. At UCLA, Huang discovered nanofibers of conducting polymer polyaniline, invented two facile synthetic methods that can produce polyaniline nanofibers in large quantities, and revealed how this new nanoscale morphology transforms the polymer’s processability and enhances its applications in sensing, composite, and other electronic devices. His paper published in 2003 (in the Journal of the American Chemical Society) has become one of the most highly cited papers in the century-old history of this polymer. Next, with the support of a Miller Research Fellowship, Huang joined Peidong Yang’s lab at Berkeley to carry out postdoctoral research, where he investigated the dewetting instability of colloidal solutions and how they can be tailored for patterning and positioning nanoparticles and nanowires.

At Northwestern, Huang and his group are studying several types of materials. Working with metal nanocrystals, they designed an evolutionary tree that allows systematic and predictive tuning of nanoparticles’ shape and optical properties and developed a high throughput purification technique for solution-made metal nanowires to improve the performance of nanowire-based transparent conductors. They were among the first to achieve patterned growth of vertical organic nanowire arrays and demonstrate their use for chemical sensing and low-loss optical waveguides.

Huang’s best-known research is in 2D soft layered materials such as graphene oxide, an oxygenated version of graphene made from graphite powders. He pioneered the conception of these single atomic layered sheets as a soft material and advocated the study of their properties as polymers, colloids, amphiphiles, and membranes. His group revealed that graphene oxide sheets are amphiphilic (loving both oil and water), and uncovered unusual size- and pH-dependent properties of this sheet-like surfactant. Huang also demonstrated that graphene oxide can disperse insoluble materials such as carbon nanotubes in water, leading to hybrid materials for making all-carbon solar cells and energy storage devices. Huang recently introduced a new concept bridging the fields of layered materials and nanofluidics. His group demonstrated that the empty space between stacked graphene oxide sheets can be employed as 2D nanofluidic channels to enhance the ionic conductivity of electrolytes. This provides a materials-based alternative to expensive lithography-defined nanofluidic systems.

Huang and his students have invented a new tool called fluorescence quenching microscopy (FQM) with unprecedented versatility for imaging single atomic layered materials. This tool allows high contrast, high throughput visualization on arbitrary substrates even in solution. FQM is now widely used by many because it is easy to learn and does not require expensive microscopes or materials.

A major problem in the manufacturing and applications of bulk graphene materials is their tendency to aggregate due to strong van der Waals attraction. Restacking of sheets not only reduces their processability, but also compromises their properties such as accessible surface area. To address this challenge, Huang and his team have developed an aerosol spray drying technique to squeeze the flat sheets into a crumpled paper ball structure, which has highly unfavorable inter-particle van der Waals attraction. The resulting crumpled graphene balls resist aggregation after heating, solvent washing, or even pelletization. They have unprecedented processability in nearly arbitrary solvents without the need for surface modification. Like crumpled paper balls, the crumpled graphene balls also have an open structure and stable high surface area, making them well suited for applications requiring a high surface area, such as electrodes for batteries, ultracapacitors, and fuel cells. Crumpled balls of graphene-based sheets have now become an avidly studied subject in materials science.

Huang’s goal as a professor is to make material innovations with enduring impact while promoting the intellectual growth of his trainees and himself. He has designed novel lab projects for undergraduate students based on his research discoveries such as polyaniline nanofibers and FQM imaging of graphene. In the classroom, he coaches inexperienced students to join him in imagining innovative ideas in materials science. For example, recently, one student in his class inquired whether the graphene flakes in a pencil lead could be a useful material (other than for taking notes). Encouraged by Huang, a couple of students set out to investigate electronic properties of pencils, and discovered that traces drawn with a flexible toy pencil can function as chemical sensors capable of detecting toxic vapors. This course project eventually led to a student publication that received coverage by the national press: “Pencil Drawn Strain Gauges and Chemiresistors on Paper.” When asked to give advice to young students, Huang always encourages them to keep up their curiosity and test their insights, just like when he combined the two textbook reactions together fourteen years ago.