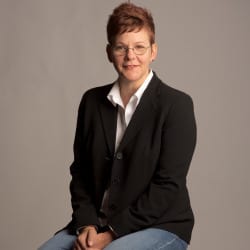 Jill Downen’s visual art focuses on the interdependent relationship between the human body and architecture expressed in temporal installations, drawings, and models. Her art envisions a place of symbiotic relation between the human bodily composition and architecture, where the exchanging forces and tensions of construction, deterioration, and restoration emerge as thematic possibilities. Downen is most known for her large-scale installations which invite viewers to experience environments that heighten their relation to space. For the Guggenheim Fellowship term, Downen will work in St. Louis and New York to produce a new site-specific installation with the working title of Temporal Bodies: A Transformation of Site and Flesh.

Significant residencies include the MacDowell Colony as a National Endowment for the Arts fellow and the Cité Internationale des Arts, Paris. Since 2001, her art has been exhibited nationally and internationally. In 2003, she received a Great Rivers Biennial Grant, sponsored by Contemporary Art Museum St. Louis and the Gateway Foundation, and in 2004, she exhibited The Posture of Place as part of the first Great Rivers Biennial. Her art has been reviewed in numerous publications, including Sculpture Magazine, Art Papers, The New York Times, and the St. Louis Post-Dispatch. Downen has extensively presented about her work, in particular at the Luce Irigaray Circle Conference on philosophy (New York, 2007). In addition, she has participated in symposiums on modern and contemporary art at the Pulitzer Foundation for the Arts in St. Louis.

Born in 1967 in Belleville, Illinois, the daughter of a master craftsman sign painter, Downen maintains her practice in St. Louis. Her art is represented by the Bruno David Gallery. She holds a B.F.A. from the Kansas City Art Institute (Painting, 1989), and an M.F.A. as a Danforth Scholar from Washington University in St. Louis (Sculpture, 2001). Since the completion of an appointment at Washington University as the Wallace Herndon-Smith Distinguished Visiting Assistant Professor in 2008, Downen has pursued art practice full-time.