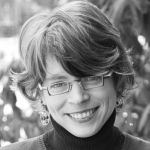 Jill Lepore is the David Woods Kemper ’41 Professor of American History at Harvard University and a staff writer at the New Yorker. She is also chair of Harvard’s History and Literature Program as well as a Harvard College Professor, an honor granted in recognition of distinction in undergraduate teaching. During her Guggenheim Fellowship term, Lepore will be working on a book called Dickens in America, an account of Charles Dickens’ travels in the United States in 1842. Her previous books include Book of Ages: The Life and Opinions of Jane Franklin (Knopf, 2013), a biography of Benjamin Franklin's sister, a finalist for the 2013 National Book Award for Nonfiction, and Time magazine's Best Nonfiction Book of the Year; New York Burning: Liberty, Slavery and Conspiracy in Eighteenth-Century Manhattan (Knopf, 2005), a finalist for the Pulitzer Prize; and The Name of War: King Philip's War and the Origins of American Identity (Knopf, 1998), winner of the Bancroft Prize. Her next book, The Secret History of Wonder Woman, will be published by Knopf in October 2014. Lepore has been writing for the New Yorker since 2005. Her essays and reviews have also appeared in the New York Times, TLS, and American Scholar, and have been widely reprinted, translated, and anthologized. She has published two collections of essays, The Mansion of Happiness: A History of Life and Death (Knopf, 2012), a finalist for the Carnegie Medal for Excellence in Nonfiction, and The Story of America: Essays on Origins (Princeton, 2012), shortlisted for the PEN Literary Award for the Art of the Essay. Follow this link to "The Meaning of Life," a lecture by Jill Lepore. Follow this link to "Jane Franklin's Spectables," Jill Lepore's discussion of Book of Ages: The Life and Opinions of Jane Franklin.