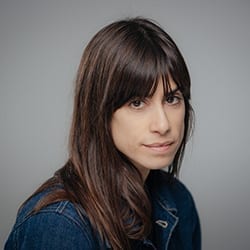 Brooklyn-based artist Jill Magid works across film, performance, writing, and visual art. Magid’s practice interrogates structures of power on an intimate level, exploring the emotional, philosophical, and legal tensions that exist between institutions and individual agency. While Magid has produced numerous video works throughout her career, she has recently been delving into the cinematic potential of film as a medium to expand on the questions she poses in her work. Her first feature-length film The Proposal (2018), commissioned by Field of Vision and distributed in the U.S. by Oscilloscope Laboratories, premiered at the Tribeca Film Festival and received numerous prestigious festival awards. Tender, her upcoming film, explores the relationship between the economy and the body, with an installation version premiering in Magid's exhibition at The Renaissance Society in Chicago in April 2021. Magid has had solo shows at major institutions including Dia Foundation, Bridgehampton; Museo Universitario Arte Contemporáneo, Mexico City; Tate Modern, London; Whitney Museum of American Art, New York; and Stedelijk Museum Bureau Amsterdam. Her forthcoming exhibition at Centre Pompidou, Paris, features a significant body of Magid's work acquired by the museum. Magid is a 2020 recipient of a Creative Time Artist Commission, and of the 2017 Calder Prize.