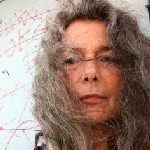 Joan Richardson is Professor of English, Comparative Literature, and American Studies at The Graduate Center, CUNY. Author of a two-volume biography of the poet Wallace Stevens, she co-edited, with Frank Kermode, Wallace Stevens: Collected Poetry and Prose (Library of America, 1997). Her essays on Stevens, on Ralph Waldo Emerson, on Jonathan Edwards, on Stanley Cavell, on poetry, on pragmatism have been published in the Wallace Stevens Journal, in Raritan, and as chapters in edited volumes. Essays on Alfred North Whitehead, on William James, on the HBO series Deadwood have appeared in Configurations and The Hopkins Review. Interviews and review essays have appeared in Bookforum and other journals. Her study, A Natural History of Pragmatism: The Fact of Feeling from Jonathan Edwards to Gertrude Stein, was published by Cambridge University Press in 2007, and nominated for the 2011 Grawemeyer Award in Religion. She is currently at work completing another volume for Cambridge, Pragmatism and American Culture. Her project for the term of the Guggenheim Fellowship period, Images, Shadows of Divine Things, is an experiment in secular spiritual autobiography that draws its design, somewhat, from Jonathan Edwards’s similarly titled text. Joan Richardson has been the recipient of several earlier awards and fellowships, including a Woodrow Wilson Fellowship and a Senior Fellowship from the National Endowment for the Humanities. Her work reflects an abiding interest in the ways that philosophy, natural history, and science intersect with literature. Having grown up using two languages, she has also always been deeply preoccupied with the nature of language itself. Though born and reared in New York City, she learned, from her very determined maternal grandmother, to read and write Demotic Greek before learning those skills in English. Being “in Greek” remains an essential aspect of her experience and informs Images, Shadows of Divine Things.