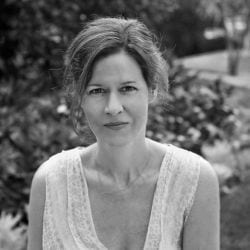 Joanna Klink is the author of four books of poetry. Her most recent book, Excerpts from a Secret Prophecy, was published by Penguin in 2015. About Klink’s poetry, Louise Glück has written: “In a culture inclined to mistake opacity for depth and stridency for passionate feeling, Joanna Klink has made a body of work at once utterly lucid and breathtakingly urgent. She navigates between those most suspicious extremes, despair and ecstasy, without ever seeming to be a poet dependent on extremes. The extraordinary beauty of her poems, from the beginning, has resulted from a constantly refined attention to the ordinary and the daily. Taken together, her books are an amazing experience: harrowing, ravishing, essential, unstoppable.”

Klink’s previous books include Raptus (Penguin 2010), Circadian (Penguin 2007), and They Are Sleeping, which won the Contemporary Poetry Series through the University of Georgia Press in 2000. Her poems have appeared in a range of journals and anthologies, including Paris Review, A Public Space, Poetry, The Penguin Anthology of Twentieth Century Poetry, and Resistance, Rebellion, Life: 50 Poems Now. She has received residency fellowships from Civitella Ranieri, the Bogliasco Foundation, the Lannan Foundation, MacDowell, Yaddo, and the Ucross Foundation.

Klink’s awards include the Rona Jaffe Foundation Writer’s Award, the Jeannette Haien Ballard Writer’s Prize, the Arts and Letters Award in Literature from the American Academy of Arts and Letters, and the Amy Lowell Poetry Traveling Scholarship, which allowed her to live in Rome in 2018. A graduate of the Iowa Writers’ Workshop and the doctoral program in Humanities at Johns Hopkins, Klink was the Briggs-Copeland Poet at Harvard University and the Tin House Writer-in-Residence at Portland State University. She is currently Professor of English and Creative Writing at the University of Montana in Missoula.

Klink has been working intermittently on a book about Paul Celan, called You. A mix of forms—lyric meditation, prose poem, literary study—You frames Celan’s search for a reader as an entry into the strangeness of poetry and its sometimes extreme demands.

She is also finishing her fifth book of poems, which is forthcoming from Penguin in 2020. Her new book includes a sequence of poems called Night Sky, based on the chambers of James Turrell’s Roden Crater. Irma Boom, the Dutch bookmaker and designer, is making an art book out of the unabridged sequence.